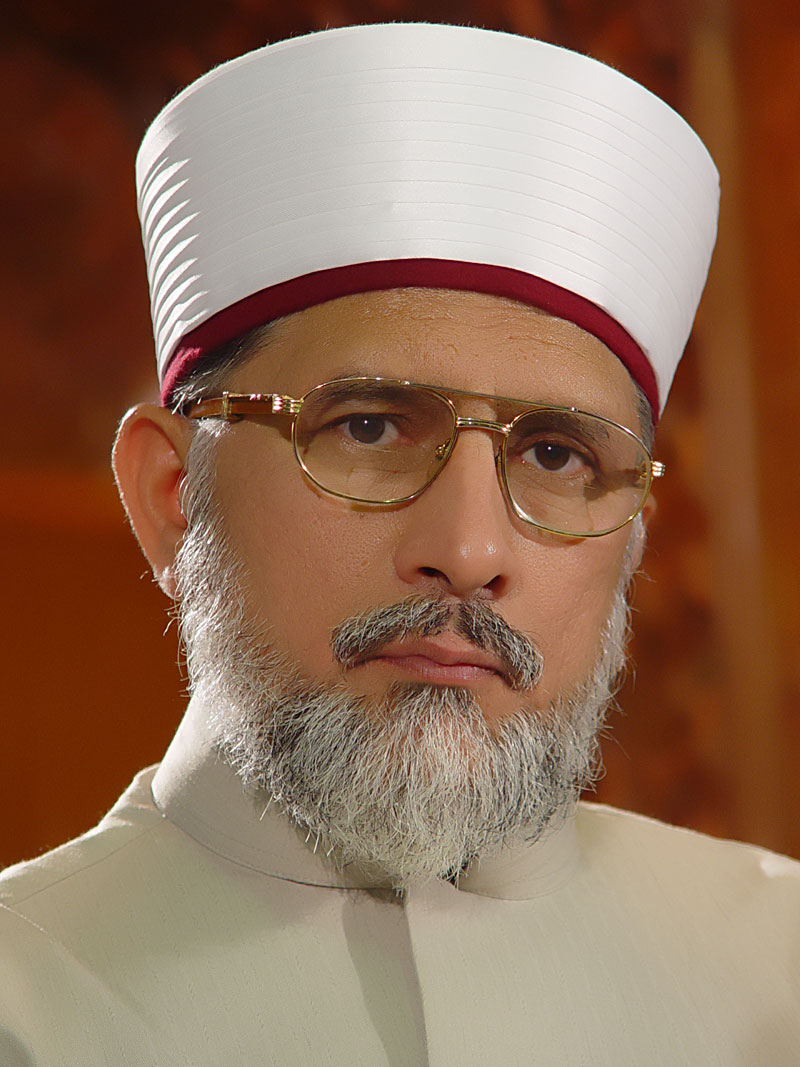 Shaykh-ul-Islam Dr Muhammad Tahir-ul-Qadri was born in 1951 in the city of Jhang, Pakistan, hailing from a family of Islamic scholars and teachers. His formal religious education was initiated in Medina at the age of 12. During his stay in Medina, Shaykh-ul-Islam often visited Madrasa al-'Ulum al-Shar'iyya, a traditional school situated in the blessed house of the Companion of the Prophet Muhammad (blessings and peace be upon him), Abu Ayyub al-Ansari (may Allah be well pleased with him), opposite the Green Dome. He completed the traditional studies of classical and Arabic sciences under the tutelage of his father and other eminent scholars of the time. He continued to travel around the Islamic world in pursuit of sacred knowledge, and studied under many famous scholars of Mecca, Medina, Syria, Baghdad, Lebanon, the Maghreb, India and Pakistan, and received around five hundred authorities and chains of transmission from them in hadith and classical Islamic and spiritual sciences. Amongst them is an unprecedented, unique and highly honoured chain of authority which connects him, through five teachers, to al-Ghawth al-A'zam al-Shaykh 'Abd al-Qadir al-Jilani (of Baghdad), al-Shaykh al-Akbar Muhyi al-Din b. 'Arabi-the author of al-Futuhat al-Makkiyya-(Damascus) and al-Hafiz Ibn Hajar al-'Asqalani, the great hadith authority of Egypt. Through another chain he is linked to Imam Yusuf b. Isma'il al-Nabhani directly via only one teacher. His chains of transmission are published in two of his thabts (detailed lists): al-Jawahir al-Bahira fi al-Asanid al-Tahira and al-Subul al-Wahabiyya fi al-Asanid al-Dhahabiyya.

In the academic sphere, Dr Qadri received a First Class Honours Degree from the University of the Punjab in 1970. After earning his MA in Islamic studies with University Gold Medal in 1972 and achieving his LLB in 1974, Dr Qadri began to practise law in the district courts of Jhang. He moved to Lahore in 1978 and joined the University of the Punjab as a lecturer in law and completed his doctorate in Islamic Law. He was later appointed as a professor of Islamic Law and was head of the department of Islamic legislation for LLM.

Dr Qadri was also a jurist advisor to the Federal Shariat Court and Appellate Shariah Bench of the Supreme Court of Pakistan and advisor on the development of Islamic Curricula to the Federal Ministry of Education. Within a short span of time, Dr Qadri emerged as one of the Pakistan’s leading Islamic jurists and scholars and one of the world’s most renowned and leading authorities on Islam. A prolific author, researcher and orator, Dr Qadri has written around one thousand books, of which over six hundred have been published; and has delivered over six thousand lectures (in Urdu, English and Arabic) on a wide range of subjects.

In 2010, Shaykh-ul-Islam Dr Muhammad Tahir-ul-Qadri issued his historic and world-renowned fatwa on the critical matter of suicide bombings and terrorism carried out in the name of Islam. It has been regarded as a significant and historic step, the first time that such an explicit and unequivocal decree against the perpetrators of terror has been broadcast so widely. The original fatwa written in Urdu comprises 600 pages of research and references from the Quran, hadith, the opinions of the Companions (may Allah be well pleased with them), and the widely accepted classical texts of Islamic scholarship. This historic work has been published in English, Arabic, Norwegian, French, Bahasa Indonesia, Hindi and Sindhi, while translation in Danish, Spanish, Malayalam, Persian, Turkish and other major languages is also in process. The Islamic Research Academy of Jamia al-Azhar Egypt wrote a detailed description of the fatwa and verified its contents. It gained worldwide media attention and acclaim as an indispensable tool in the intellectual and ideological struggle against violent extremism.

In 2018, Shaykh-ul-Islam Dr Muhammad Tahir-ul-Qadri launched his magnanimous Quranic Encyclopædia. This encyclopaedia is the cumulation of his fifty-year long effort in studying the Quran and it comprises eight volumes consisting of around five thousand subjects. The subjects have been worded according to contemporary requirements and needs. From the encyclopaedia’s unique features, one will find modern, scientific and philosophic subjects addressed. It is impossible to encompass all the subjects and topics that are discussed in the Quran. However, the Quranic Encyclopædia, with its approximately five thousand subjects, is exhaustive and comprehensive in terms of contemporary needs and requirements. Last three volumes contain a comprehensive index of Quranic words. This index will facilitate in accessing the shoreless oceans of meaning in the Quran.

Also Dr Qadri is the founder and head of Idara Minhaj-ul-Quran (IMQ), he is the chairman of the Board of Governors of Minhaj University Lahore (MUL), which is chartered by the Government of Pakistan; he is the founder of Minhaj Education Society (MES), which has established more than 600 schools and colleges in Pakistan; and he is the chairman of Minhaj Welfare Foundation (MWF), an organization involved in humanitarian and social welfare activities.

Dr Qadri has spent his life, and especially the last decade, in an indefatigable effort to counter religious extremism and promote peace and harmony between communities. His painstaking research into the Quran, hadith and classical Islamic authorities has resulted in landmark works, many published, and others soon to be published, demonstrating Islam as a religion that not only safeguards human rights, but promotes peace, tolerance and socioeconomic progress. He has travelled extensively to lecture at the invitation of government and non-government institutions, and has organized and took part in international conferences in order to promote peace. He has arrayed spiritual and educational training programmes across the Western world with a focus on addressing the roots of religious extremism. He is recognised for his commitment to interfaith dialogue, with over 12,000 people attending his Peace for Humanity Conference in 2011, probably the largest interfaith gathering ever held in the UK, and which announced the London Declaration, a charter for world peace, signed online by a quarter of a million people. He has been politically active in his native Pakistan, organizing massive pro-democracy and anti-corruption demonstrations. When not travelling, he is based in Canada, busy in his research activities and producing vital works of Islamic scholarship relevant to Muslims in this day and age.